As the project approached, I could sense the volunteer’s excitement to hike the Alice-Toxaway Loop in the Sawtooth Wilderness. Though animals scattered at the sound of our tools clinking hard at work, we saw marmots, a snowshoe rabbit, an osprey, woodpeckers, and a 2 point buck. Every day of the seven day project, the volunteers hiked out on trail with such enthusiasm, and you could see the talent building with each day for those new to trail maintenance.

Each day we started having two groups to cover a larger range of trail work. During the first two days, the volunteers completed the majority of the 18-mile Alice-Toxaway Loop. By the second night both groups had reunited to start other scopes of the project. On the third day the Edna Trail and Edith Trail were both being worked. For a lunch break, one group watched an inchworm stretch to a leafy lunch overlooking Edith, while the others at Edna dipped their toes into the lake for to refresh for the afternoon. On the fourth day we all went en route to the Edna junction, breaking into groups as we hiked to certain parts of the trail. Some hiked 14 miles round trip, past Vernon Lake to cut out a tree that was causing horses issues on the trail. Others hiked up to Sand Mountain Pass to repair and widen tread along the Edna trail that was tricky for hikers trying to trek the switchbacks. The last group worked closer to the junction moving rocks and clearing brush that stretched over the trail.  On the last day we cleared brush and repaired the final 2 miles of the Toxaway Loop. The others hiked the social trails to campsites, cleaning up trash left, and dismantling fire rings they came across. Overall the volunteers maintained roughly 29 miles of trail within the Sawtooths!

Cleaning, repairing, and constructing waterbars was the biggest achievement with an astounding total of 256 maintained. This is a huge help since it will prevent erosion of the trail. To help maintain the corridor wide enough for horses and hikers, 12 trees were cleared from the trail.  Along rocky sections of the trail, we moved 6 large boulders off the trail and dug fresh tread for hikers and horses to pass safely. Hikers and horses had been loosing their footing on the slippery granite rocks. Lastly, since it is not permitted to have fires within this section of the Sawtooths, we scoured the rocky hillsides and campsites for used fire rings. Fortunately, we did not find too many.

To keep our volunteers in such great shape after the long days of work. We had Mystic Saddle Ranch pack our gear in and out of the base camp. We were accompanied by Bortch, who was an amazing cook and story teller. Every night we went to bed with our tummy’s full of a delicious dinner and sometimes dessert. They provided a lovely base camp.  Each volunteer felt like they were living in luxury in the backcountry wilderness.

As our group grew closer through the days of hard work, we gave our tools nicknames that could easily have been mistaken as crew member names. Our crosscut (AKA Mick Jagger) was named because we liked the way it moved. A saw from the 1930’s, it astounded us that it was in such good shape. But the other crosscut needed a name too.  Because both saws were so similar, the second one was named Roxanne. However, they needed one more friend, so our loppers soon became Cindy Lopper. And that is how we gained three more crew members.

Thanks again to our volunteers for their talent and hard work. It was a very rewarding project.  We look forward to doing this project again next year! If you missed out this year, be on the look out to participate next year! 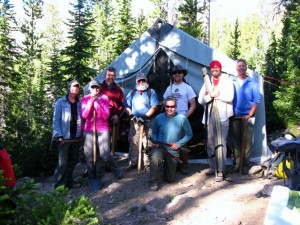 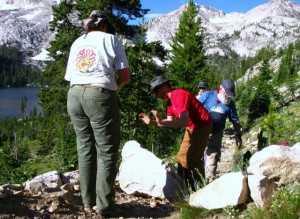 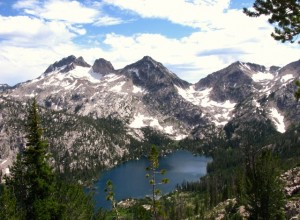