Clay’s CDT Blog Part 7: Stand off with a moose 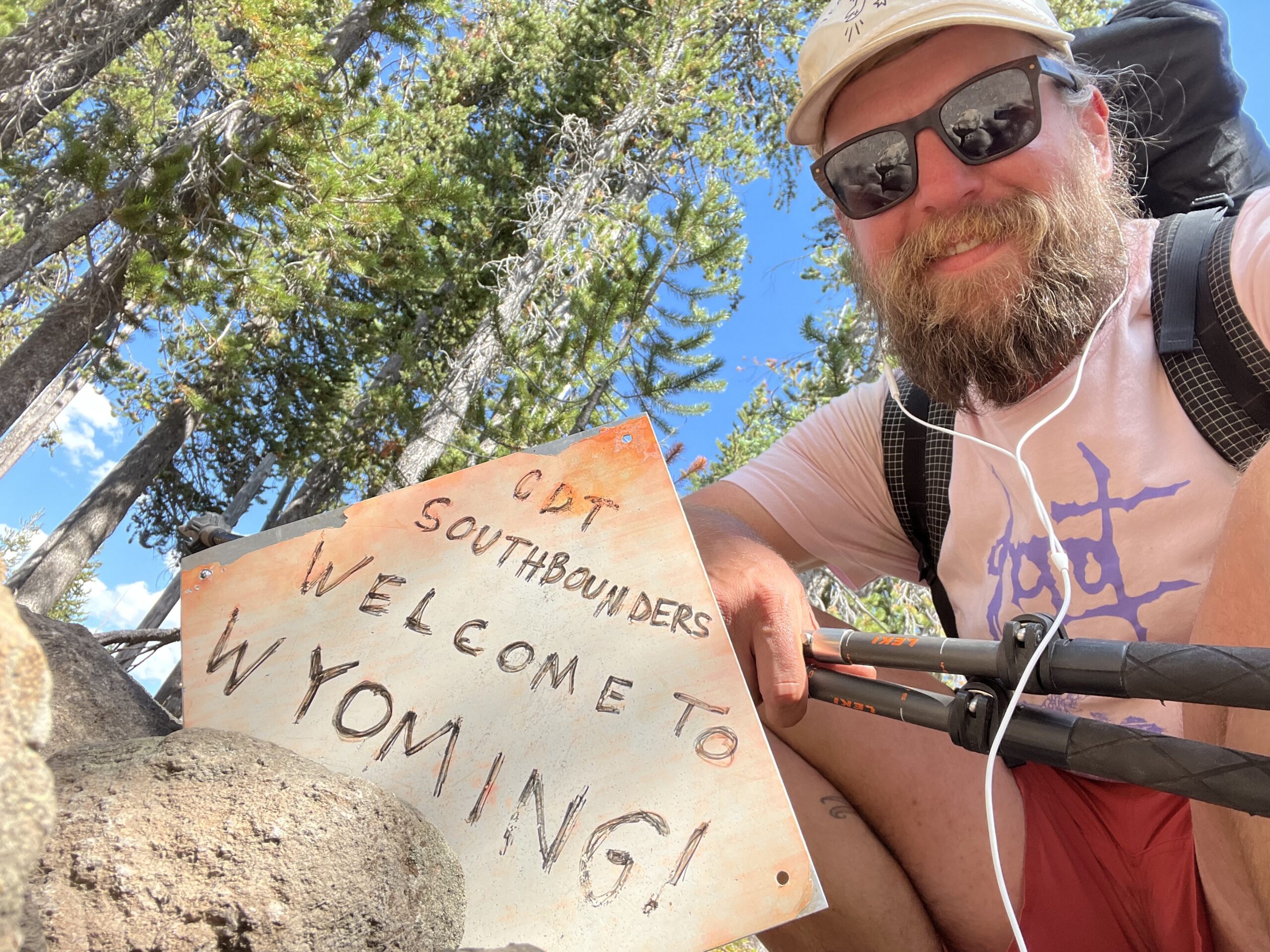 Leaving Lima, the trail followed dirt roads up to the descriptively named Table Mountain. The table top provided several miles of nice, flat hiking and then a quick hop to Little Table Mountain, for slightly less miles of flat mesa walking. Beyond the Tables the trail stuck to the ridge, winding through crispy, dry grass with waves of grasshoppers erupting from underfoot like dust in a silty pond. Their clicking through the air was constant, while only occasionally would one land on my beard or leg. From a Simplot mine in the Centennial Mountains, I watched a distant storm roll over Eastern Idaho, lighting up the clouds above the twinkling lights of Rexburg.

It was a 26 mile day to reach Island Park, and for the first time, I left the official trail and followed an alternate towards town. From Lillian Lake, I climbed up the Hell Roaring Creek drainage up towards the summit of Sawtelle Mountain. The trail seemed to have been abandoned, with the lower section being obliterated by beavers. After wading through some muck and marsh, I picked up the old trail and had an excellent hike up the creek. Just before cresting the pass, I stopped for a snack break, spreading my food out before me on the creek side. While I sat there, deciding between jerky or almond M&Ms (and eventually eating both), a sudden movement caught me by surprise.

A large bull moose was coming down the hill straight towards me. I hopped off my pack and hid behind a tree, startling the moose as much as he had startled me. He came to a stop about 30 feet away, right next to my pack. For the next 20-30 minutes I watched him graze suspiciously on the grass around my pack and each time I’d slowly poke out from behind the tree, he’d whip his big head around and stare straight at me. As he drifted off out of sight, I snuck towards my pack, hoping to gather my snacks and go, but once again he turned back around and spotted me. I pulled back and got behind some trees a bit further away and waited and eventually, the stand off came to an end. Finally, I grabbed my gear and dipped over the pass towards Island Park. 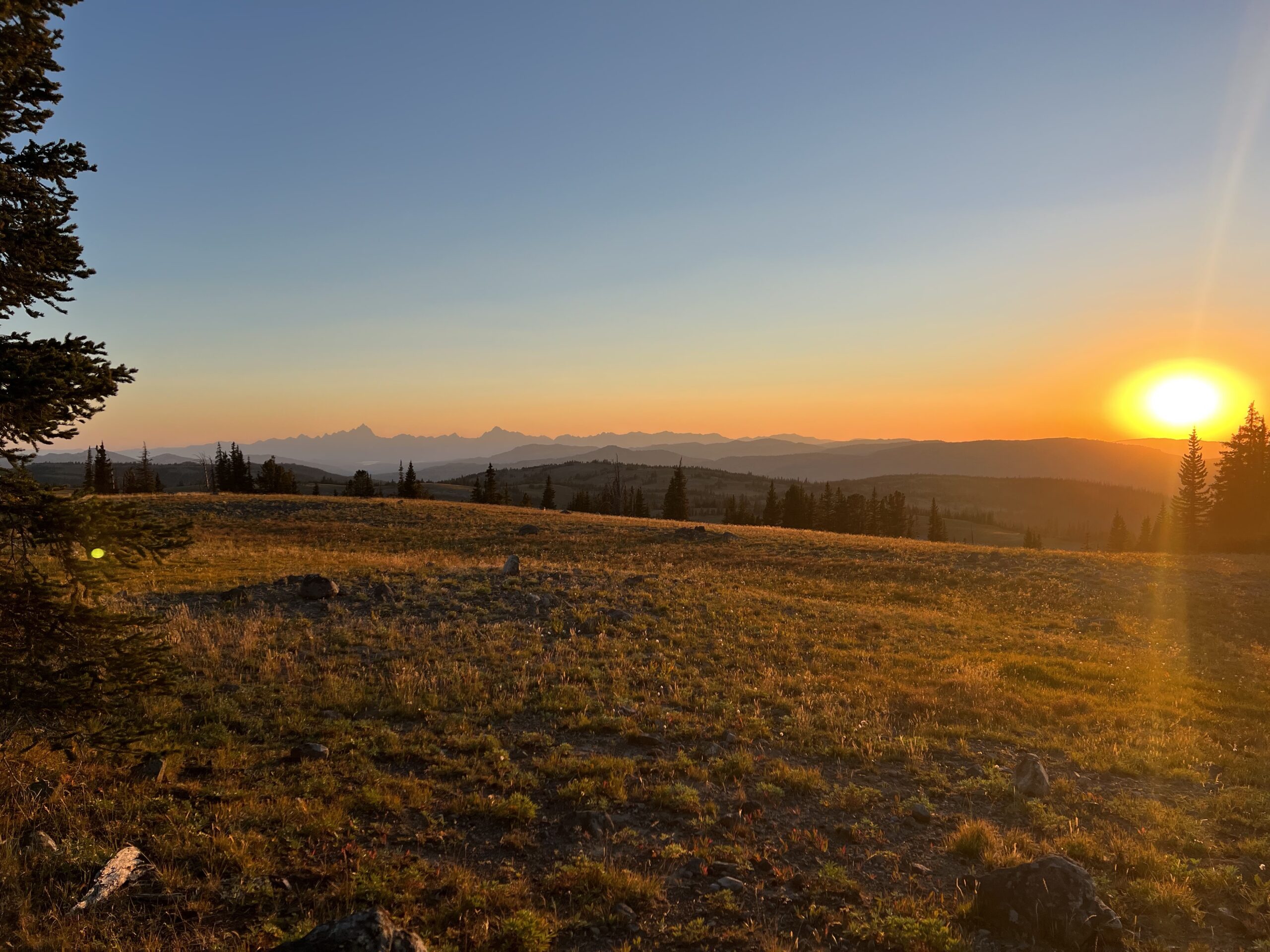 Since leaving Lima, a nagging pain had been developing in a tooth that broke long ago. As I road walked the last 9 miles into Island Park, the pain turned to swelling and when I finally got to town, my face had taken on a new, lumpier shape. This prompted an emergency dental visit in West Yellowstone to get the offending tooth yanked out. (Thanks to Trail Angels Nate and Abby for the rides!) It took 2 days to get into the dentist, and then another two to make sure that it was healing up alright. We packed up to leave town, called to set up our Yellowstone permits, and then realized we had another 2 days to kill before our permit dates. This is how we ended up burning a whole week of hiking time.

Having been camped at a resort in Island Park, we decided to head to West Yellowstone for a change of scenery. We stayed at the historic Madison Hotel in some dormitory style hiker rooms. The owner Garret even drove out to Island Park to pick us up! At the hotel, we met a cross country biker named Dylan and the three of us went out to grub down with the Yellowstone tourists. We played pool for the supremacy of hikers vs bikers and once again reigned supreme.

The next night we did karaoke at the Wild West Saloon and were treated to pizza by Trent and Taylor, friends of mine who live in Ashton. This is the 2nd trail Trent has done trail magic for me, having run into him by chance on the Pine-Featherville road when I was hiking the Idaho Centennial Trail. He was on his way to a bachelor party and had a cooler full of beer in his truck that he shared with our whole group!

Finally, we got back on trail with another lift from Garret. As we were unloading from the truck, Quality broke one of his trekking poles. Garret saw it snap and offered Quality a pole he had in his truck. This guy really takes care of his hiker guests! The area around Island Park is mostly flat with dense pines. It makes for easy hiking, but not much to see beyond the impenetrable green walls to either side of the trail. Eventually we made it to the Yellowstone Boundary, then the Wyoming Boundary, and then to our first Yellowstone campsite at Summit Lake. 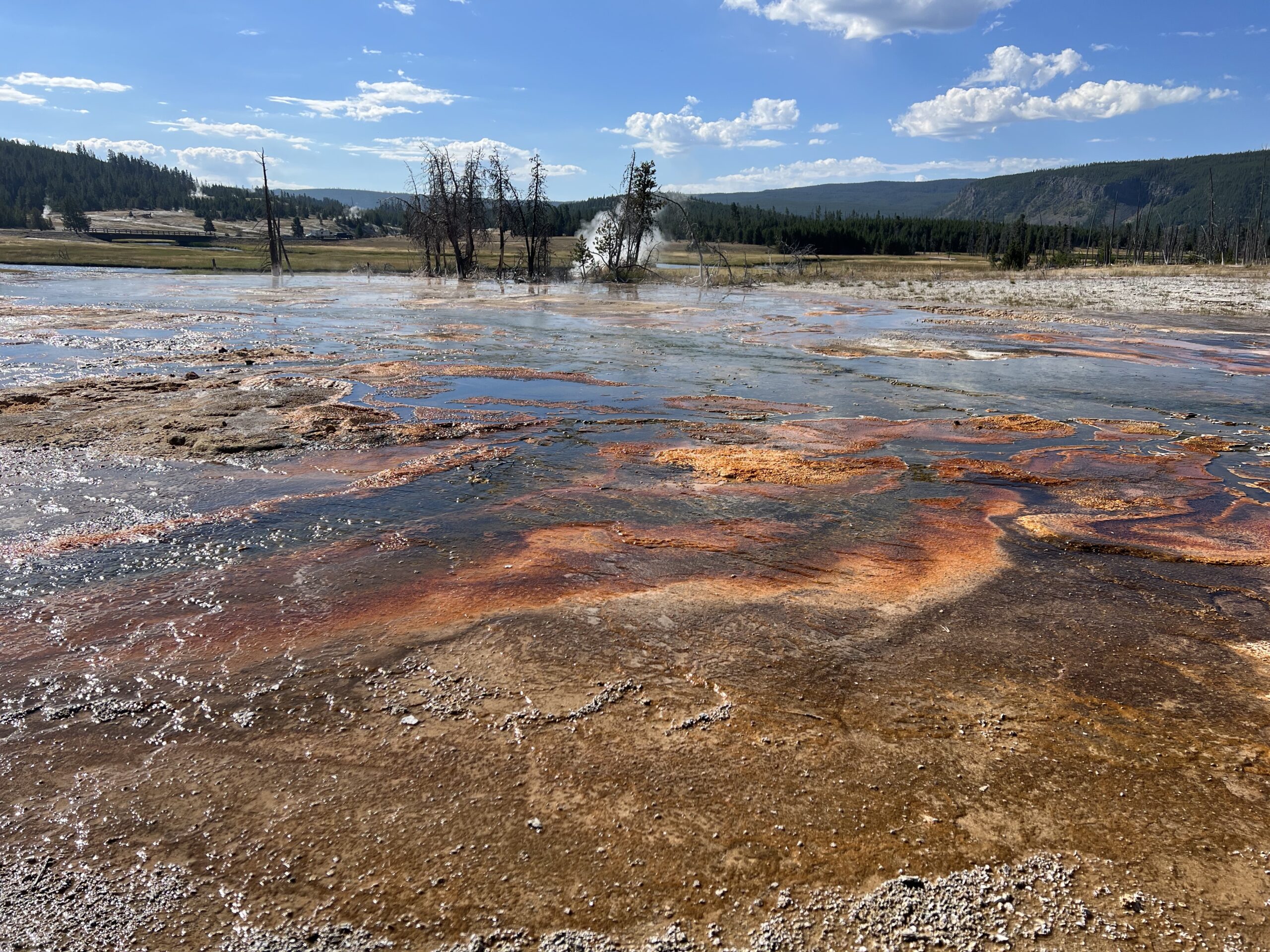 Quality considers himself to be quite the skipper, and as such, he’s been carrying about 10 excellent skipping rocks in his pack for the last 100 miles. Each time he finds a perfect rock along the trail, he adds it to his collection, in anticipation of finding a lake suitable for such coveted rocks. Summit Lake seemed to fit the bill, and he skipped a few rocks without much success. Deciding another lake would be better, he packed up his remaining rocks and put them back in his pack.

The next day we hiked down the Firehole River into Biscuit Basin, and that’s when the scenery really got extraordinary. The trail popped us out onto a boardwalk and we went by Sapphire Pool, Jewel Geyser, Gem Pool, and Artemisia Geyser.  These bubbling holes rimmed with otherworldly colors steamed all around the trail, making the air humid and sulfurous. After several miles of touring the waterworks, I arrived at Old Faithful just as she was starting her regular show. Following the eruption, I stopped for a chicken sandwich and root beer float before continuing on to our camp near Shoshone Lake. The last few miles once again took us through a basin full of boiling water and steam vents but this time, no other tourists were around and we got the scenery all too ourselves. It felt like hiking on Mars.

The next day our destination was Heart Lake, but Quality decided to take a side trip into Grant’s village to conduct a second assault on the park’s legendary breakfast buffets. Well, it must have been quite the meal because I haven’t seen or heard from him since. I carried on alone, hiking down Witch Creek to Heart Lake. The creek was fed entirely by hot water and was scalding hot. I passed a few pack trains on the way in and set up camp at Surprise Creek (surprisingly normal temperature) as the sun was going down.

The next day I hiked up into the headwaters of the Snake River. It was a marvel to see the mighty Snake river where it was only 10 feet wide and a foot deep. It ran through a wide valley, full of willows. Each time the trail dipped into the willows, I expected to run into a grizzly bear head on. All day I had a sense that I would see a brown bear, as this is a very heavily populated area. With my guard up, I climbed up from the Snake River to a 10,000 foot plateau in the Teton Wilderness with a mind-blowing view of the East side of the Tetons. The sun setting over the Tetons made for one of the best camps of the hike so far.

Dropping down from the plateau in the morning, I descended along North Two Ocean Creek. The creek follows the divide and then hits a tree and pools up. The water splits over the divide into Atlantic and Pacific creeks which flow east and west to their respective oceans. I took a drink there from this anomalous water. Once again I was in the willows, hiking North and south Buffalo Forks of the Snake, and the Soda Fork, on trails that were pack train superhighways. Again I was expecting a grizzly encounter and stayed on edge. Climbing above the river, the craggy peaks of Wyoming were lit up by the setting sun, highlighting their jagged faces. 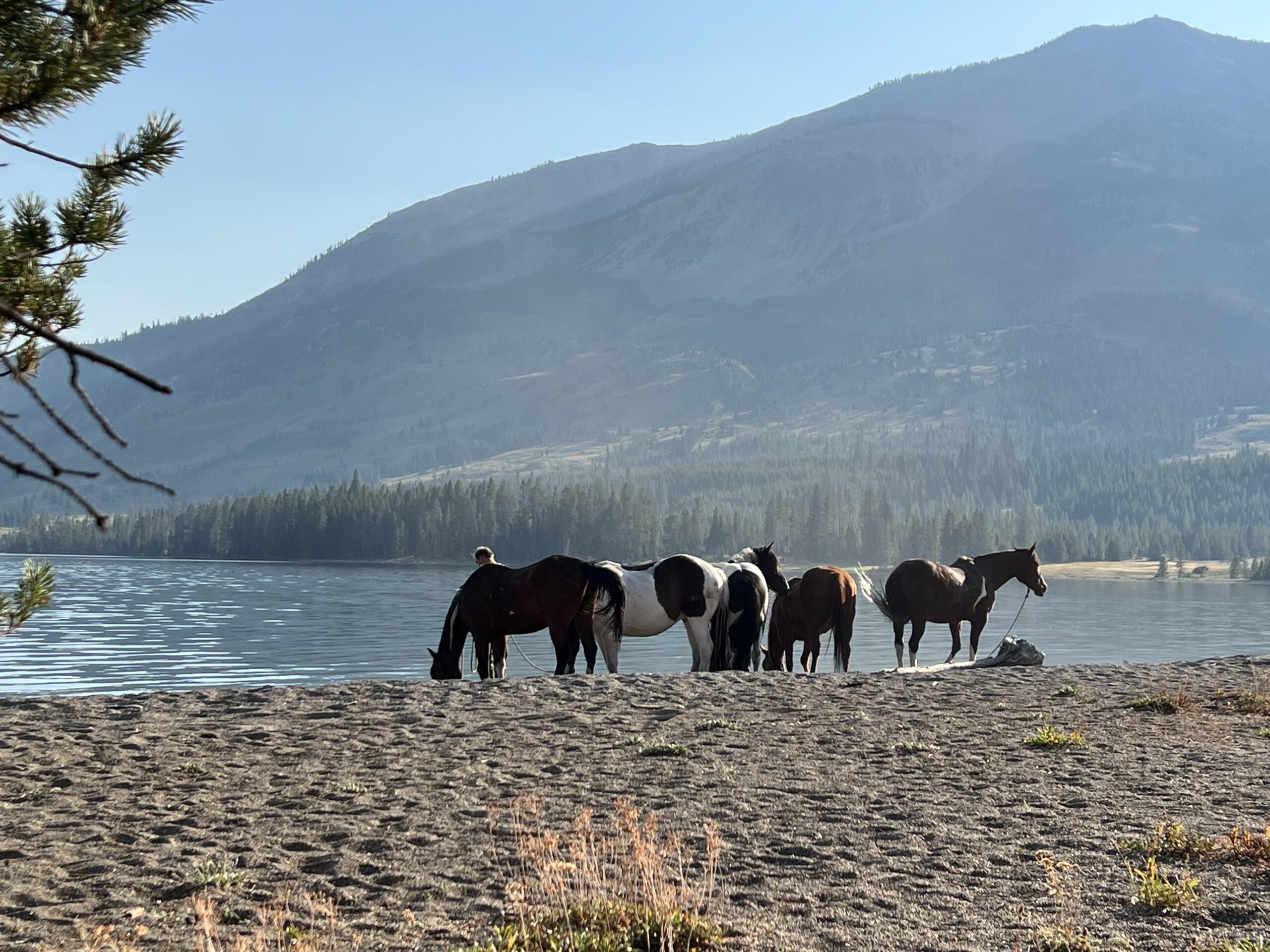 Just as the last light was draining from the day, I started setting up camp next to a creek. Across the meadow, in a stand of burned snags, some sudden movement in the pale dusk caught my eye. A flash of tan fur and then a dark limb waving wildly in the air. I squinted in the failing light, trying to confirm that this was indeed a grizzly. Then suddenly I realized: I was staring at a horses ass in the distance, with its long tail twitching at the flies. They noticed me and 4-5 horses climbed out of the brush. Whew, ok, just horses! I called out to them so they would know I was a harmless human and yelled hello into the darkness. Nobody answered so I assumed they were asleep, since most folks don’t hike until the sun goes down.

I went back to setting up my tent when suddenly someone speaks up right behind me, “Hey, we’re camped right over there.” I about jumped out of my skin with the sudden spook. “That’s how easy a bear can sneak up on you.” Wow, thanks for that! We chatted briefly. He was returning from glassing the hillsides, scouting for his big elk hunt. Apparently he was also practicing walking silently through the woods and scaring the life out of people.

The next day I made my way out of the Teton Wilderness and hiked through Upper and Lower Brooks Lake, an absolutely beautiful canyon with impressive ridge lines and square mesas. Arriving at the highway, I put on a clean shirt and stuck out my thumb, hoping to catch a ride into Dubois, WY. About the tenth car that passed pulls over and happens to be a young hiker named Hummingbird that had started Northbound on the CDT this year but left the trail due to a health issue. She was excited to find another CDT hiker on the road side and happily gave me a lift. There always does seem to be a little magic involved when you’re hiking a long trail, and chance occurrences like this always tend to happen when you need them.

Next up is the Wind River Range, which every northbound hiker has been raving about. I’m taking an extra day off in Dubois to let the heavy smoke blow through, so my views and pictures aren’t obscured. This should be an incredible stretch of hiking! 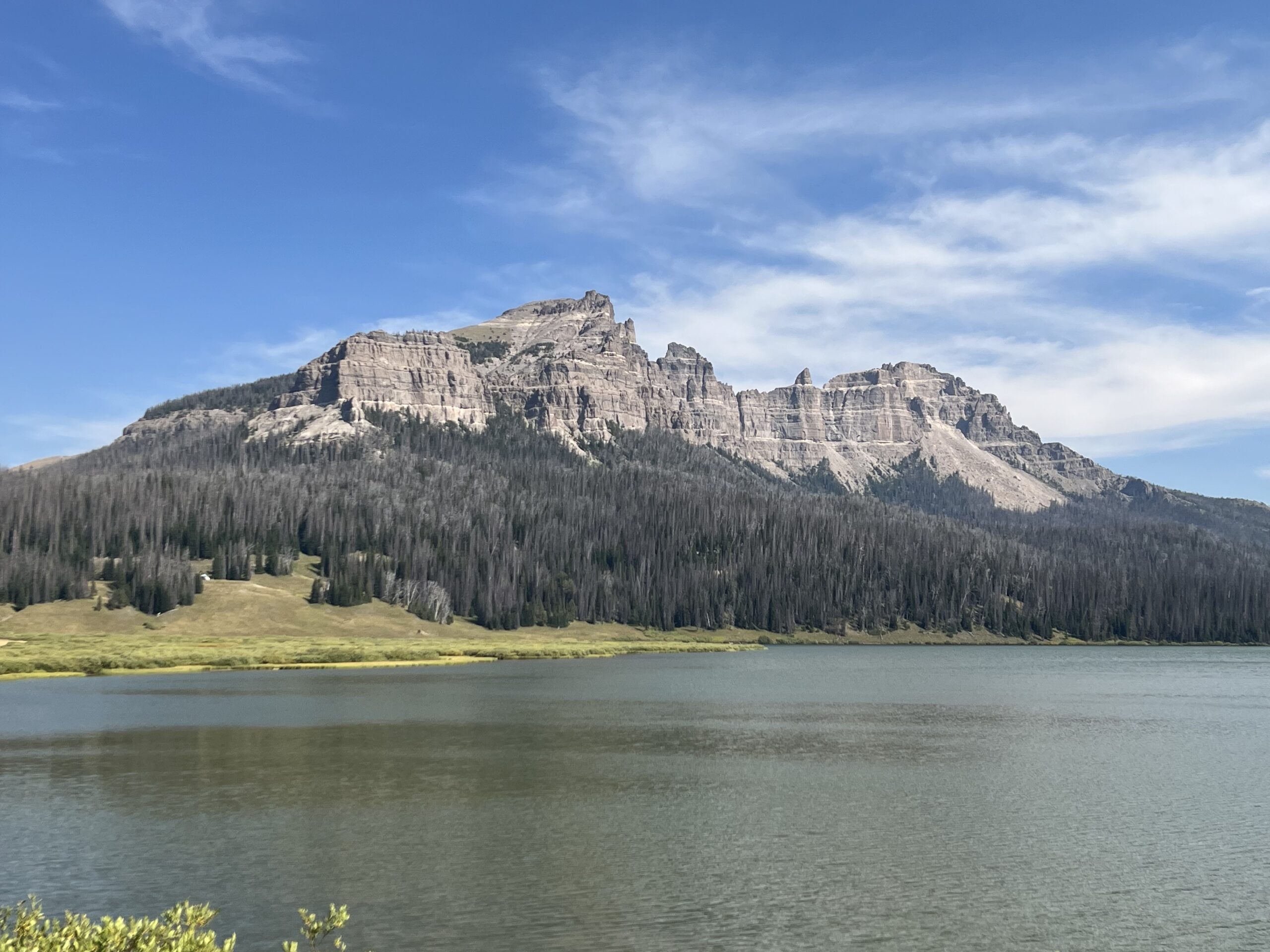 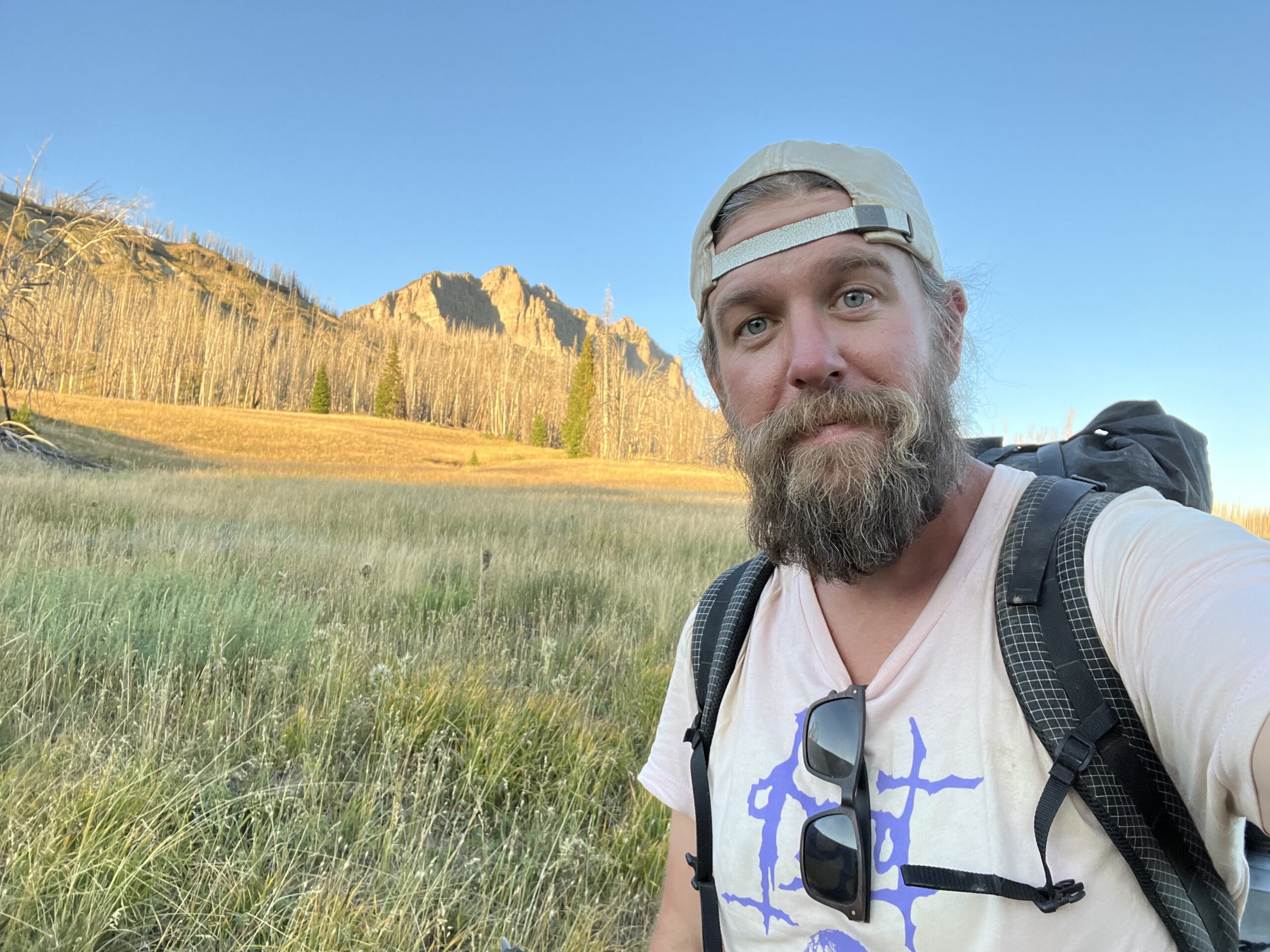 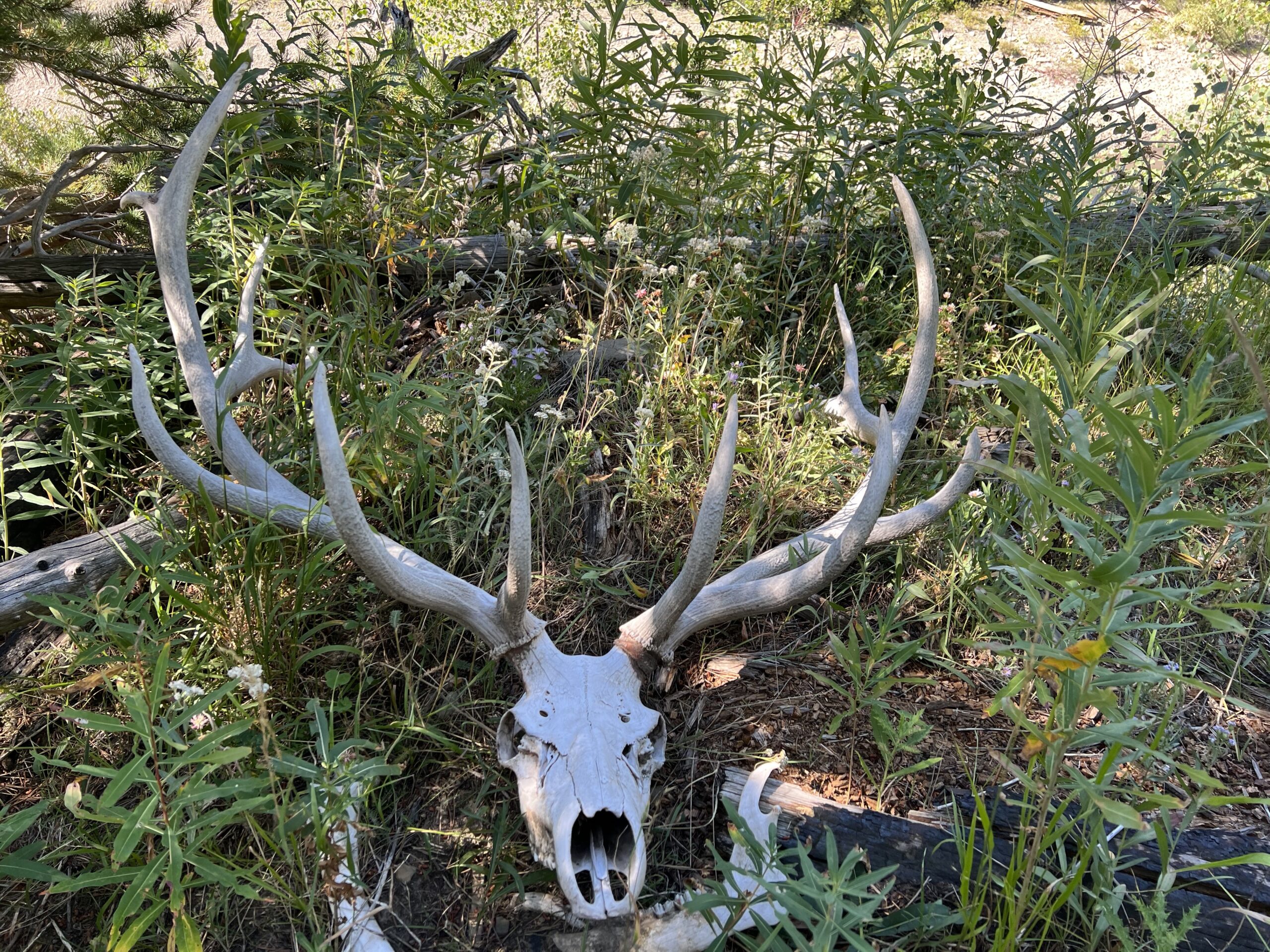 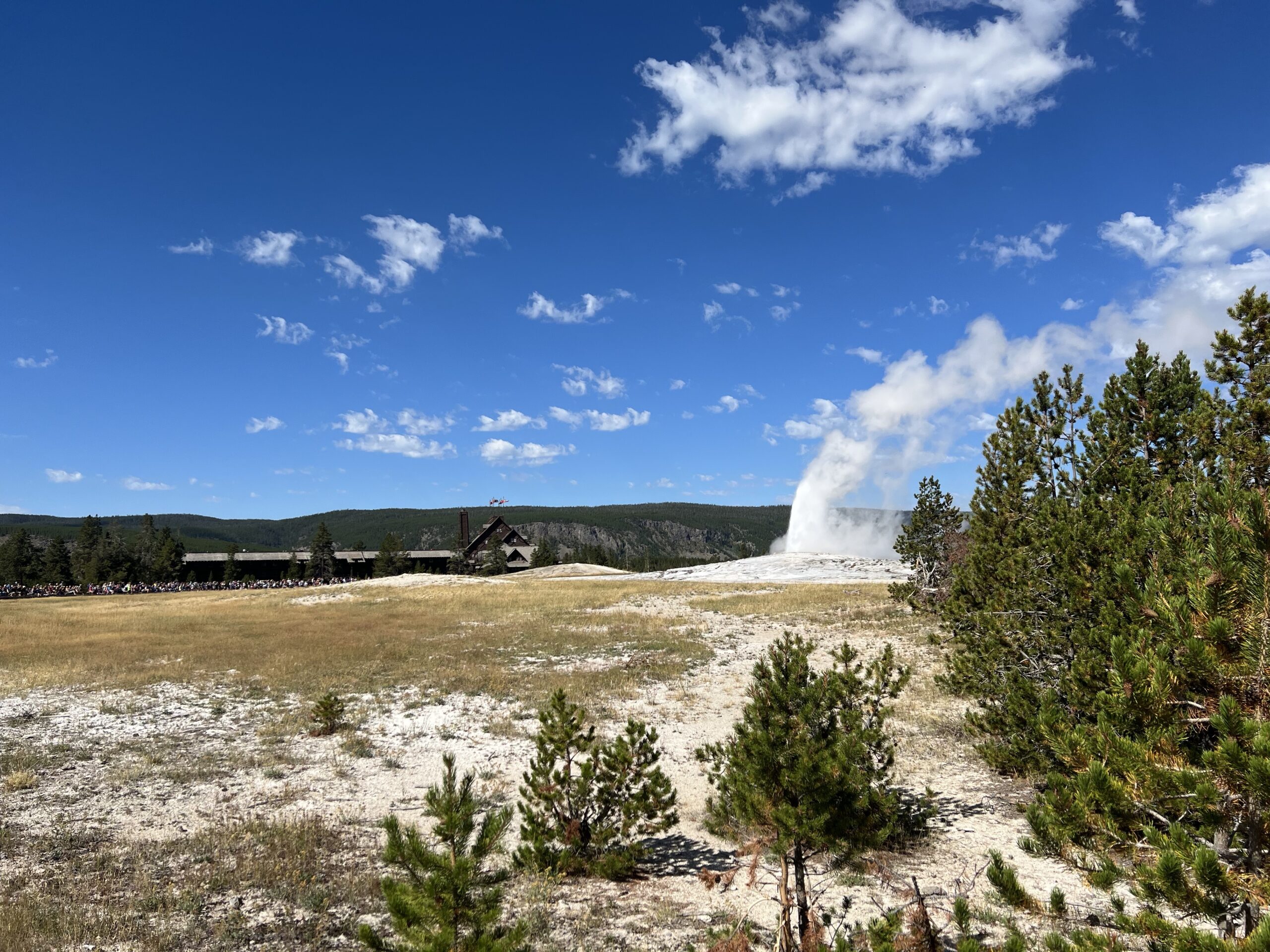