Why Clear That Trail? (It’s in the middle of nowhere!) 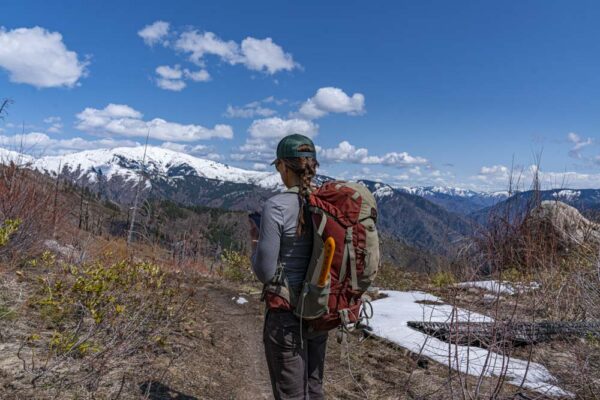 The Sheep Creek Trail, from Windy Saddle in the Seven Devils Mountains to the Snake River in Hells Canyon, was cleared for the first time in years this past fall and spring. Three friends and I planned a two-day hike from Windy Saddle to Pittsburgh Landing for early October to see this “slice of Hells Canyon”, from 7600 to 1200 feet elevation. We descended from 15-year-old lodgepole pine and dense huckleberry, a testament to rebirth after wildfire, to Douglas fir and ponderosa pine to sagebrush and hawthorn to grass and hackberry. It was incredible.

It was also obvious that hundreds of logs and lots of brush and small trees had been recently cut to open the trail back up. There were places it still needed tread work, and places it was hard to find through old burns, but the trail was there- a path through solitude, adventure, and history- and a path to memories, allowing the place to become part of each of us.

Had ten more years passed, Mother Nature may have reclaimed the trail entirely. To me, this was a near-miss, a close call, saving the “life” of a trail. But to some, the thought may have been more like “Why clear trails ‘no one’ uses?” or “Why clear trails in the middle of nowhere”?  The Sheep Creek trail travels through rugged country, down and away from the popular high mountain lakes of the Seven Devils, then through a poison ivy-lined canyon to end at the Snake River, still 16 miles upstream of the nearest road. 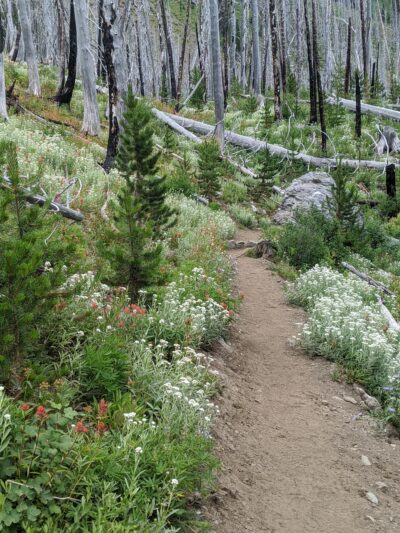 There are trails in Chamberlain Basin of the Frank Church Wilderness southeast of the Seven Devils that are 40 miles from the nearest road, trails that traverse miles of lodgepole forest and wet meadows- trails few travel. There are trails in Idaho wilderness that have been so impacted by fire that a week’s crosscut work may make 2 miles of progress, pulling the saw under hot skies amid snags and scrubby brush. Many of them are “just” trails: they don’t end at a spectacular alpine lake or blue-ribbon trout stream. They cross ridges, run alongside willow-lined streams or down granite-strewn hillsides. They are remote and challenging and exposed and rugged. They are a pain in the a** to clear and sometimes even more of a pain to get to, if their preservation is viewed through the modern lens of “time is money” and convenient time-saver hacks and Google calendar planning that deals in hours, not days or weeks. But if we step back and take a wider view, these geographic and temporal challenges become reasons why we SHOULD preserve these trails.

The most remote trails tell stories of epic length. The Nez Perce tribe, traveling from low river canyons to high mountain meadows with the coming of summer for generations. Miners, loading a pack string and doubling down on the chance at riches- if there wasn’t a trail to get there, they might just build one. The first public land champions, sitting around a fire along an Idaho river, talking excitedly of protecting special places in perpetuity- no matter if the process took longer than their tenure, or their lives. The cycle of wildfire and regrowth, trees, forbs and shrubs taking turns in an endless succession of shade, sun, and nutrient cycling, sometimes spanning hundreds of years.

The view from the middle of a Douglas fir stand deep in the Selway-Bitterroot Wilderness can be as breathtaking and “worth the hike” as one from the edge of an iconic lake in the Sawtooths. Just the idea one can still go somewhere and be entirely alone in a place measured in days, not minutes, from a road or store or stoplight is, for me, beautiful all by itself. I’ve been stopped in my tracks by a single dogwood in full fall color in an unnamed drainage, mesmerized the same as I’ve been by the alpenglow at Sheep Lake in the Seven Devils. 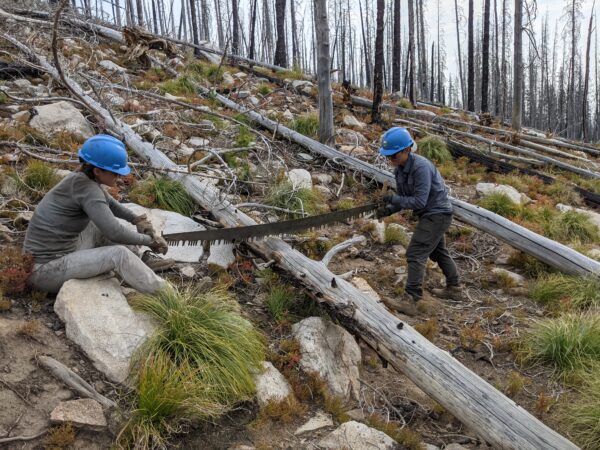 So back to those pain in the a**, most remote of remote trails in the “middle of nowhere”. If we keep them alive, keep them on the “worth it” list, think of our task as generational and ongoing, our sweat and time as an investment in something much bigger than tourism and hiker number counts and convenient accessibility, we preserve a connection to our past. We preserve opportunity for kids who may be Snapchatting on at their iPhones as I write this, unaware that one day they may long for a place to be away from pings and notifications and constant social connection- where all they see are lodgepole pine and a trail stretching forever before and behind them. We preserve “middle of nowhere” trails as part of a legacy, past and future.

**Exciting note! ITA is planning our first “immersion” trail project in the summer of 2023, in the Frank Church Wilderness. Eight volunteers will have the chance to work for three weeks on some of the most remote trails in Idaho and experience Wilderness as generations past may have (but with much nicer gear!). Stay tuned for more information as our 2023 project schedule release date approaches.