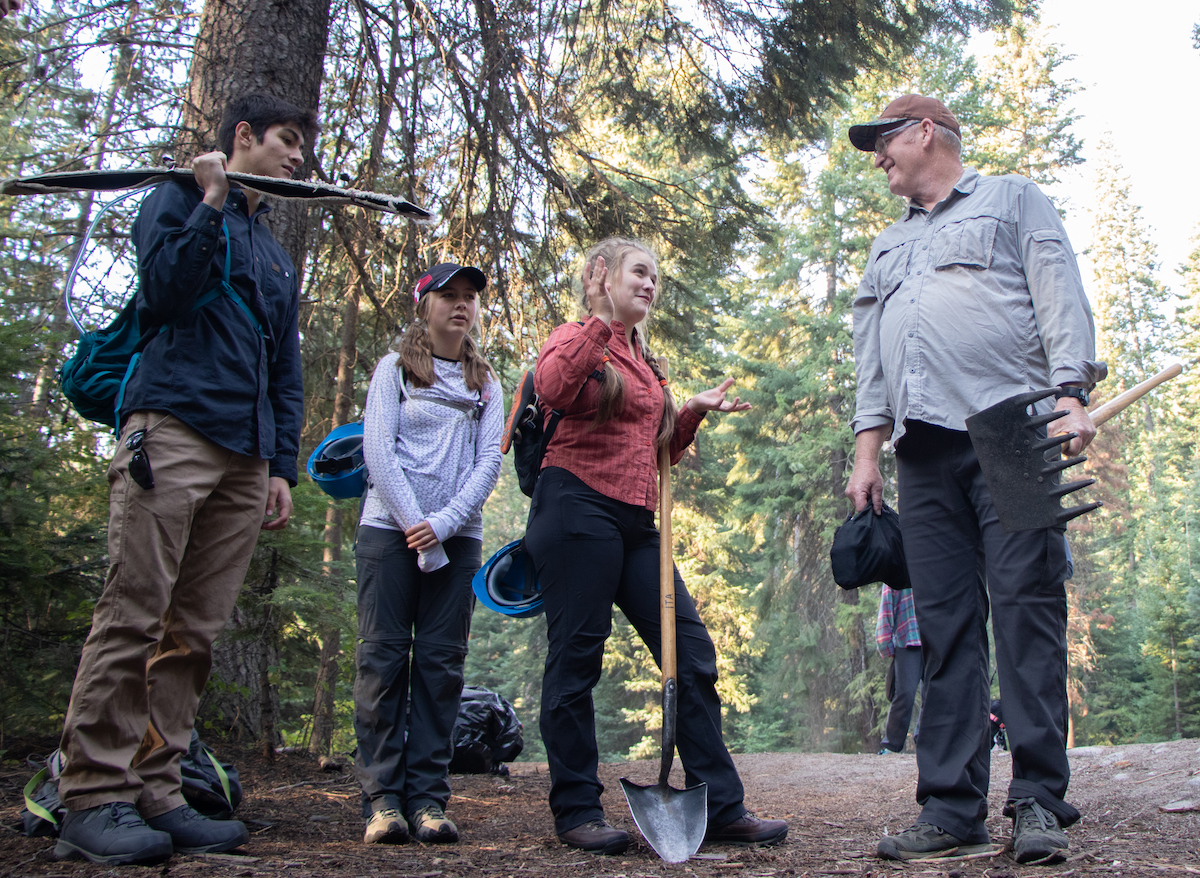 Barry and youth crew members on the Split-Loon project

There a good reason why ITA crew leader Barry Miller was given the award of Crew Leader of the Year in 2022- he led three projects, one of them being a backpacking trip as part of our Youth Trail Crew program. It’s a lot to take a group of youth into the backcountry to do trail work– even more so to teach them how to backpack at the same time! Luckily for Barry, this wasn’t the first trail work project for most of the teens on this trip. Many had met Barry for the first time last year on a week-long youth project in the Sawtooths and he had gotten the group together a few times throughout the year to keep the relationships they had developed over trail work going and attend some of the teen’s high school performances as a group.

When asked why Barry deserved the Crew Leader of the Year award, one of the teens from that project replied, “I’ve been on two trips with Barry total, and he is always willing to support the crew, as individuals and as a team. Not only is he a great leader on the trail, but off it as well. He’s reached out to many of the members on the trip outside of the trail, was excited to see their performances and congratulate them the whole time.”

We asked Barry a few questions about his experience volunteering with ITA. Over his many years as a volunteer and crew leader, he has accomulated some great stories to tell!

What is your background in? I entered college as a wildlife & resource management major. After a semester of biology courses, I decided a new path might be best and eventually graduated with a degree in Architecture. The first 15 years of architectural practice was spent working on projects in Sequoia/Kings Canyon and Yosemite National Parks. In that time I had the opportunity to guide the Secretary of the Interior cross country through Sequoia N.P. to look at a proposed site for development of visitor services. I also designed an eight hole outhouse for a remote (12 miles by trail) High Sierra Camp for the concessionaire in Yosemite N.P. Now I oversee the design/construction program for the State of Idaho.

How and Why did you first get involved with ITA? I’ve always enjoyed backpacking and hiking and enjoyed many miles of adventures with my two daughters. When they moved away from home, my wife wasn’t to keen on solo hiking. I saw a presentation at REI where trail maintenance trips with ITA were mentioned. It sounded like a great way to get out into the wilderness that my wife would approve of. I signed up for my first trip on the Alice/Toxaway loop in the SNRA. The trip was led by Clem Pope. Some of the other participants were Tim Martin and daughter Bella, Clay Jacobsen and Tobey Jinkins. The camaraderie was great, the food was packed in and prepared for us, except for moving a ton of rocks, it was a fabulous experience and I was hooked.

What do you like about volunteering with ITA? As part of my work in Yosemite N.P. I participated in a long range planning effort. During that time, my respect for environmental advocacy clubs took a severe hit. ITA is a way to care for the environment. A hands on approach in which the only purpose is to allow others to enjoy what I enjoy. In this way I’m not sucked into the quagmire of environmental politics, some of which I agree with and some I don’t.

Most memorable backcountry or ITA experience? My many experiences are what brings me back. One crew I was on received accomodations from the SNRA for “controlling and containing the Farley Lake fire.” Another trip we were forced to find an alternative exit route to escape a fire with trees torching only a mile from us.

On the flight out of the Frank Church on one trip we got caught in a late winter snow storm and flew around and around trying to find a way out before landing at a remote airstrip along the Middle Fork of the Salmon. We spent the night and then waited the next day until a plane could bring in fuel in as we did not know until we were on the ground that we were out of fuel.

I spent one trip with a SNRA Wilderness Ranger from whom I learned that permanent structures are not allowed in the wilderness. When out of sight of him, I built a snowman in the middle of a snow field. He proceeded to display his hockey skills and with a shovel destroyed it with a mighty slap shot.

On another trip, we had to ford a two foot deep white water stream each morning and evening to access the trail. We left our hiking boots on the work side of the stream until the final evening crossing. I had tied my boot laces together and hung them over my shoulder. About mid-way across I slipped, the boots swung up and knocked my glasses off which fell into the stream. Fortunately after about 15 mins. of bending over feeling along the bottom downstream from where they got knocked off they were found undamaged and returned to their rightful place in front of my eyes. That was a relief as I had a 9 mile hike back to the trailhead and an 8 hour drive home for which glasses were quite valuable.

Why are trails worth protecting? On a trip last summer, the trail got progressively worse until we came to an old burn area where lodgepole pines were taking over to the point we lost the trail. After bushwacking for about a mile until we once again found the trail you know why trails are worth protecting.

Thank you so much, Barry, for your hard work both on and off the trail for ITA! 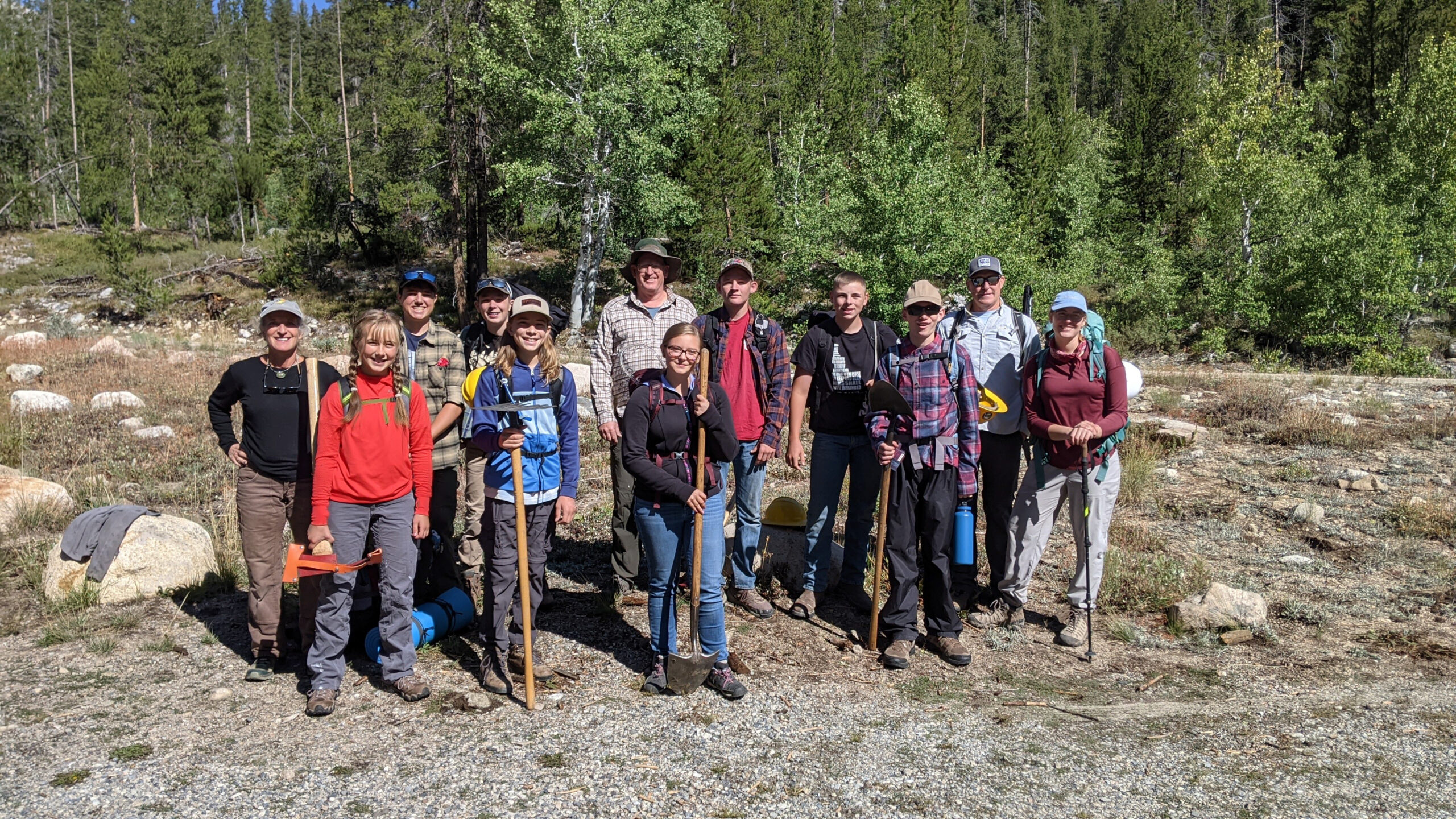